The Fed’s easy money policies have pushed margin debt on the New York Stock Exchange (NYSE) to record levels laying the groundwork for a severe correction or another violent market crash.

In December, margin debt rose by $21 billion to an all-time high of $445 billion.

Buying equities on margin, that is, with loads of borrowed cash, is a sign of excessive risk taking the likes of which invariably takes place whenever the Central Bank creates subsidies for speculation by keeping interest rates pegged below the rate of inflation or by pumping trillions of dollars into the bloated financial system through misguided liquidity programs like QE.

Investors have shrugged off dismal earnings reports, abnormally-high unemployment, flagging demand, droopy incomes, stagnant wages and swollen P/E ratios and loaded up on stocks confident that the Fed’s infusions of liquidity will keep prices going higher. It’s only a matter of time before they see the mistake they’ve made.

The chart below illustrates how zero rates and QE lead to excessive risk taking. The correlation between the stratospheric rise of margin debt and the Fed’s destabilizing monetary policy is hard to avoid. This is what bubblemaking looks like in real time. 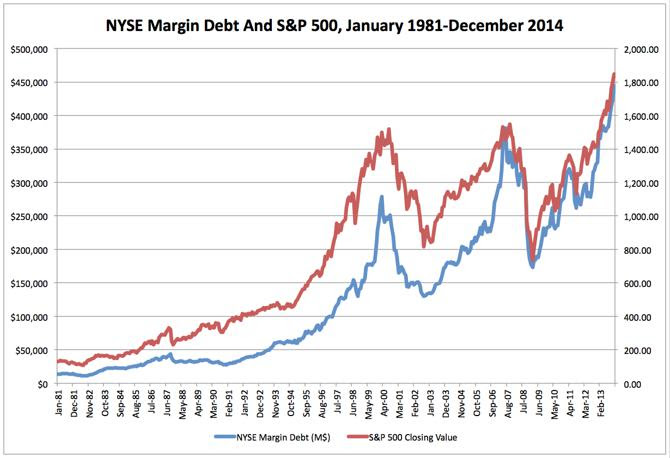 In the minutes of the FOMC’s December meeting, FOMC officials acknowledge the froth they’ve created in financial assets which is why they’ve begun to scale back their asset purchases. The Fed hopes that by gradually winding down QE they’ll be able to stage a soft landing rather than a full-blown crash. Here’s an excerpt from the FOMC’s minutes:

“In their discussion of potential risks, several participants commented on the rise in forward price-to-earnings ratios for some smallcap stocks, the increased level of equity repurchases, or the rise in margin credit. One pointed to the increase in issuance of leveraged loans this year and the apparent decline in the average quality of such loans.”

There you have it, the Fed sees the results of its work; the distortions in P/E ratios, the exuberant stock buybacks (“equity repurchases”), the deterioration in the quality of leveraged loans, and the steady rise in margin debt. They see it all, all the bubbles they’ve created with their gargantuan $3 trillion surge of liquidity. Now they have started to reverse the policy by reducing their asset purchase from $85 bil to $65 bil per month, the effects of which can already be seen in the Emerging Markets.

The bubble in Emerging Markets has burst sending foreign currencies plunging and triggering a sharp reversal in capital flows. The hot money that flooded the EMs,–(which lowered the cost of borrowing for businesses and consumers)–is entirely attributable to the Fed’s policy. QE pushes down long-term interest rates forcing investors to search for higher yield in other markets. Thus, the cost of money drops in EMs creating a boom that abruptly ends when the policy changes (as it has).

Capital is fleeing EMs at an unprecedented pace precipitating a dramatic slowdown in economic activity, higher consumer prices and widespread public distress. The Fed is 100% responsible for the turmoil in emerging markets, a fact which even mainstream news outlets blandly admit. Here’s an excerpt from an article in Bloomberg just this week:

“Investors are pulling money from exchange-traded funds that track emerging markets at the fastest rate on record…More than $7 billion flowed from ETFs investing in developing-nation assets in January, the most since the securities were created, data compiled by Bloomberg show…

The Fed’s asset purchases had helped fuel a credit boom in developing nations from Turkey to Brazil. Accumulated capital inflows to developing-country’s debt markets since 2008 reached $1.1 trillion, or $470 billion more than their long-term trend, according to a study by the International Monetary Fund in October.” (“Record Cash Leaves Emerging Market ETFs on Lira Drop“, Bloomberg)

The Fed doesn’t care if other countries are hurt by its policies. What the Fed worries about is how the taper is going to effect Wall Street. If the slightest reduction in asset purchases causes this much turbulence abroad, then what’s it going to do to US stock and bond markets?

The answer, of course, is that stocks are going to fall…hard. It can’t be avoided. And while the amount of margin debt is not a reliable tool for calling a top; it’s safe to say that the recent spike in investor leverage has moved the arrow well into the red zone. Investors are going to cash out long before the Fed ends QE altogether, which means the selloff could persist for some time to come much like after the dot.com bubble popped and stocks drifted lower for a full year. Now check out this clip from Alhambra Investment Partners newsletter titled “The Year of Leverage”:

“For the year, total margin debt usage jumped by an almost incomprehensible $123 billion, while cash balances declined by $19 billion. That $142 billion leveraged bet on stocks far surpasses any twelve month period in history. The only times that were even close to as leveraged were the year leading up to June 2007 (-$89 billion) and the twelve months preceding February and March 2000 (-$77 billion). Both of those marked significant tops in the market.” ( Alhambra Investment Partners newsletter titled “The Year of Leverage“)

Investors are “all-in” because they think that the Fed has their back. They think that Bernanke (or Yellen) will not allow stocks to fall too far without intervening. (This is called the “Bernanke Put”) So far, that’s been a winning strategy, but that might be changing. The Fed’s determination to taper suggests [. . .]