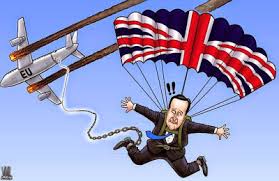 Despite the Vote, the Odds Are Against Britain Leaving the EU

The propagandists who comprise the Western political and media establishments succeeded in keeping the real issues out of public discussion and presenting the leave vote as racism. However, enough of the British people resisted the brainwashing and controlled debate to grasp the real issues: sovereignty, accountable government, financial independence, freedom from involvement in Washington’s wars and conflict with Russia.

The British people should not be so naive as to think that their vote settles the matter. The fight has only begun. Expect:

— The British government to come back to the people and say, look, the EU has given us a better deal. We can now afford to stay in.

— The Fed, ECB, BOJ, and NY hedge funds to pound the pound and to short British stocks in order to convince the British voters that their vote is sinking the economy.

— More emphasis on the vote’s weakening of Europe, leaving all to the mercy of “Russian aggression.”

— Hard to resist bribes (and threats) to prominent members of the leave majority and pressure on such leave leaders as Boris Johnson to be reasonable, concillatory and to maintain good relations with Washington and Europe, and to reach a compromise on remaining in the EU.

— Expect the Confederation of British Industry (CBI) to attribute the loss of British jobs and investment opportunities to the leave vote.

Once you learn to think about how things really are and not as the presstitutes present them, you will be able to add to the list all by yourself.

Remember, the Irish voted against the EU and pressure was kept on them until they reversed their vote. This is the likely fate of the British.

Information continues to come in about the Brexit vote. A member of the British Army said that 90% of the lads in his unit voted to leave. They voted exit because they do not believe they should be involved in Washingtons wars. He said that his unit agreed that the wars are dictated by Washington, via Brussels, and not by the British people. He also said that that the soldiers were “taking their own pen” to the ballot box, because “they only use pencils at the polls and they could be rubbed out and changed.”

Richie Allen in London, a radio presenter in Manchester, England, said that as an Irishman he remembers how the Irish vote against the EU was overturned when the people rejected the Lisbon Treaty and that already in England “they’ve begun talking about the possibility that the EU will come back with a better offer.” In other words, the exit vote is not being treated as meaningful. See his guest column here: The Campaign To Undermind The Vote — Guest Column by Richie Allen

And as Stephen Lendman reports, the propaganda is already in high gear with David Cameron setting the tone by emphasizing how happy the vote has surely made Putin and ISIS (somehow these two deadly enemies are happy over the same thing!). The self-hating Russian, Garry Kasparov, said Brexit was “the perfect gift for Vladimir Putin,” as Britain’s exit leaves the EU a “weakened institution with less power to confront Putin’s assaults on Europe’s borders.” What assaults, Garry?

Former US ambassador to Russia Michael McFaul is “shocked, shocked!” The US and EU lost, Putin wins.

Of course, the vote had nothing to do with Putin or Russia. But the liars are going to try to make the British feel that they betrayed England and gave Russia power over Europe. Russian spokesman Dmitry Peskov replied to the nonsense: We are accustomed to “the Russian factor” as the explanation of all events in the universe.

The British people might think that they are out of the EU, but they are not. They have a long hard fight ahead. Washington and the British political and media establishments that serve Washington are not going to let them leave.