brutality, calls for empty reforms, desire for fundamental change, George Floyd, injustice and inequality, Niles Niemuth, no mention of the historic level of unemployment that has gripped the country, Rejecting calls to “defund” the police, spontaneous demonstrations, the racial narrative deployed by the ruling class does not explain anything, The role that racism plays in police violence has been amplified to drown out all other social issues., the ruling class’s response, WSWS

Norm’s note: while my attitude toward the WSWS tends to be somewhat critical (or guarded), now and again I find that they do publish articles worthy of being perused, and this one by Niles Niemuth, I think, should be read. (For some examples of things that have put me on my guard with respect to the WSWS, see THIS, but also and especially THIS piece by Gilbert Achcar.)

Social class, capitalism and the murder of George Floyd

The funeral for George Floyd in Houston, Texas on Tuesday came after two weeks of powerful protests against police violence, which erupted after the release of the video of his murder at the hands of four Minneapolis police officers.

Hundreds of thousands have taken to the streets in every state in the US, and in dozens of cities internationally. These spontaneous demonstrations, unifying protesters of every race and ethnicity, have been motivated not only by an overwhelming sense of outrage and disgust over the cops’ murder of an unarmed black man, but also broader anger over the brutality, injustice and inequality that pervade American society.

It is the mass experience of millions of youth and ordinary working people with the brutal American reality that underlies the explosive response to Floyd’s final agony. 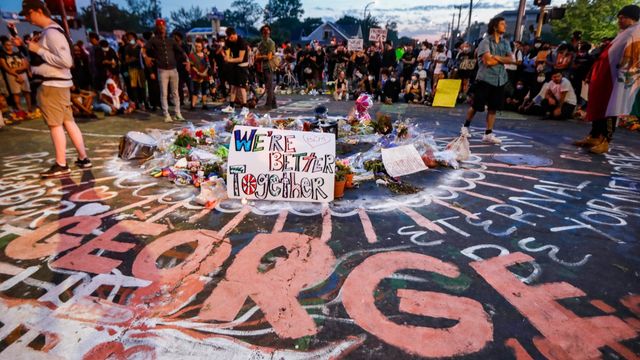 Protesters gather at a memorial for George Floyd where he died outside Cup Foods on East 38th Street and Chicago Avenue, Monday, June 1, 2020, in Minneapolis. (AP Photo/John Minchillo)

The demonstrations have given expression to a powerful desire for fundamental change. Within this movement there are growing numbers of people who recognize that police brutality is a manifestation of deeper social ills, rooted in the economic structure of society and the extreme concentration of wealth within a small segment of the population. This growing awareness, which trends inevitably toward socialism and the explicit rejection of capitalism, frightens the ruling class. It is therefore doing everything it can to divert the mass movement toward politically manageable channels. This is the function of the racial narrative that dominates all official discussion of police brutality and the murder of George Floyd.

It is worth reviewing the different stages of the ruling class’s response to the killing.

The initial response to Floyd’s killing was the typical cover-up of every police murder. None of the officers involved were charged or arrested. The video of his death, which went viral on social media, broke through the narrative that this was just another death in police custody and sparked an eruption of anger that had been building just beneath the surface.

After the political establishment’s initial shock over the response to Floyd’s murder, with night after night of protests, first on the streets of Minneapolis and then across the country, the ruling class responded with the full force of the state. The police beat and maimed protesters, fired volley after volley of tear gas, smoke grenades, rubber bullets, bean bags and pepper spray. Peaceful protesters were slandered as rioters and looters, and journalists were targeted for assault and arrest. More than ten thousand were arrested—most for violating curfews set by Democratic mayors—hundreds were wounded, and many killed in the course of the onslaught. The National Guard was deployed in dozens of states to aid in the repression.

The apex of the repression occurred in Washington, DC, where President Donald Trump attempted to set into motion a military coup d’état. This plan failed, at least for the time being, not because of opposition from Congress (there was none), but because sections of the military feared that its premature intervention could trigger violent resistance and a civil war for which the Pentagon is not yet adequately prepared.

In this unstable situation, the Democratic Party, mainstream media and large corporations have shifted gears to the co-optation stage, seeking to reframe the issues that motivated young people and workers to turn to the streets in a manner that is more suitable to the ruling class. The role that racism plays in police violence has been amplified to drown out all other social issues.

While Floyd’s funeral allowed for genuine expressions of grief by his family and the public who rallied to their side, this was cynically manipulated by that section of the political establishment and black bourgeoisie that specializes in misdirecting and disarming aroused public opinion.

The Democrats’ presumptive presidential candidate, former Vice President Joe Biden, and political huckster Al Sharpton were both given prominent billing at the ceremony to frame police violence as fundamentally a racial issue, which can be resolved with mild reforms. Neither had anything to say about the fact that President Trump and a significant section of the state had seized on the protests to prepare a coup to overthrow the Constitution.

Sharpton dishonestly claimed that if the victim in Minneapolis had been white and the cops black, there would have been no hesitation to arrest the cops and bring charges. Biden declared that Floyd’s murder was the outcome of “systemic abuse.”

If anyone represents systemic abuse, it is Biden, whose political career over a period of nearly 50 years is marked by criminality, indifference and reaction. He has operated as a major figure in the Democratic Party power structure, writing the Violent Crime Control and Law Enforcement Act of 1994, which escalated the mass incarceration of primarily African American men and expanded the death penalty. As Barack Obama’s vice president for eight years, Biden was part of an administration that funneled billions of dollars’ worth of military equipment to the police and whitewashed one police killing after the next.

Rejecting calls to “defund” the police, Biden is instead proposing to provide $300 million in additional federal funding to “reinvigorate” the police and help implement limited changes such as more body cameras, a national standard for the use of force and the hiring of more minority cops. He also calls for embedding social service providers with the police when they respond to emergency calls relating to mental health, drug use or the homeless, thereby compelling social workers to operate as an arm of law enforcement.

Biden’s former opponent in the Democratic Party primaries, Bernie Sanders, has taken the same position. In an interview published in the New Yorker on Tuesday, Sanders opposed calls to “abolish” or “defund” the police, instead calling for more funding and more training. In his long interview, Sanders avoided any mention of “political revolution” (his former campaign slogan) or the “billionaire class.” His positions are now indistinguishable from those of Biden.

Left out in all the commentary in the mainstream media and from the political establishment is any reference to the reality that underlies both the brutality of the police and the massive eruption of popular protests.

While it is easy for phrases such as “white supremacy” and “systemic racism” to pass through the lips of these bourgeois politicians, one word is unmentionable: capitalism. There must not be an examination of the deeper social and economic processes, the immense levels of social inequality built up over decades that have created the conditions for the death of Floyd and so many other workers like him. Instead, there are once again calls for empty reforms, which have been heard repeatedly over the last 50 years.

The aim of the Democrats and their adjuncts in the media, the pseudo-left and academia is to chloroform public opinion with platitudes about confronting “white fragility” and ensure that the relationship of police violence to the broader social and economic system is not raised in any significant manner. The purpose of the sophistic arguments developed by middle-class academics and now deployed by the Democrats is to absolve the capitalist system of any fault and present police violence as the outcome of an irredeemably racist society—embodied in particular in white workers.

The demonstrations of the last two weeks, which have been multiracial and multiethnic and swept through every section of the country, have blown apart the arguments that the United States is a fundamentally racist society.

Testifying before Congress yesterday, Philonise Floyd, George Floyd’s brother, eloquently called attention to the united and international movement that has emerged in the wake of his death: “George called for help and he was ignored. Please listen to the call I’m making to you now, to the calls of our family, and the calls ringing out in the streets across the world. People of all backgrounds, genders and races have come together to demand change.”

Workers and young people must recognize that the racial narrative deployed by the ruling class does not explain anything about the fundamental problems confronting the working class in the United States and around the world.

The Socialist Equality Party seeks to connect the fight against police violence and the defense of democratic rights with an independent political movement of the entire working class against inequality, poverty, war and the capitalist system. There is a tremendous potential now for the building of a socialist movement. But the political radicalization of masses of workers and youth must be turned into a conscious revolutionary struggle for socialism.