I remember the story, more or less, of how Mahatma Gandhi, through nonviolent civil disobedience, led India into the promised land of democracy and independence.  Indeed, so great was his accomplishment, that a statue of the great man stands in his honor on the grounds of Carleton University, not too far from where I live.

No doubt, not only is this bronzed statue of the iconic figure here immortalized if only for what we are told the great man accomplished, but it also stands on that campus, as others like it in so many other places do, as a lesson to those students who would change the world, that violence isn’t the only or necessarily the best way.  That is, unless, of course, if you are an entire nation trying to ply your way independently from the hegemonic West in foreign or domestic policy terms, say, like Yugoslavia  in the 90s, or Iraq, Libya, and Syria in the 2000s, to take but a few recent and ongoing examples — then raining death and destruction on an entire nation, sometimes for years on end, is not only acceptable, but apparently morally imperative. 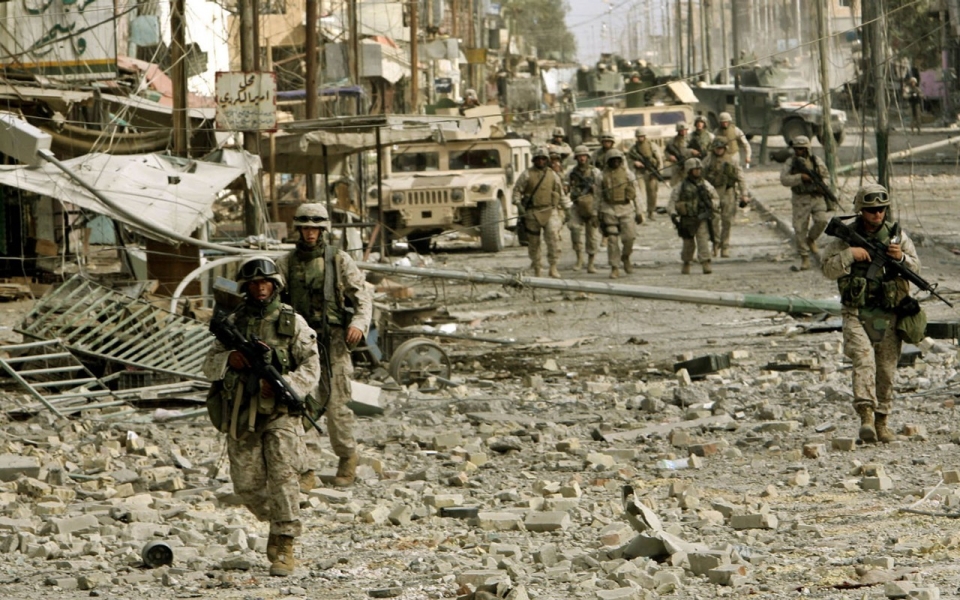 Do you sense a contradiction, here?  And why would that be, I wonder?  I mean, why should Gandhi be held up to us as our guide and model for going about challenging all that is truly horrendous about ‘our’ society even as ‘our’ society commits murder on an industrial scale more or less as it has been doing uninterruptedly in other parts of the world for the last two or three hundred years?

And then, what about Gandhi, really?  Not everyone buys the story.  Harpal Brar, for example, summarizes his book, Inquilab Zindabad, India’s Liberation Struggle, in the following manner:

There is a widespread myth spread by bourgeois historians that Ghandi and the Indian National Congress were solely responsible for achieving India’s independence from the much-hated British Raj, and that they did it using only the message of non-violence, peaceful non-cooperation and civil disobedience.

The truth is quite the reverse. The heroes of the 1857 revolt, the Ghadar patriots, and Bhagat Singh and his comrades inspired and led the Indian masses in armed struggle as the best means of liberating their country from British colonial occupation.

Many thousands of ordinary people and many hundreds of revolutionary leaders made the ultimate sacrifice in the pursuit of this noble cause. Their struggle is summed up by Bhagat Singh’s popular slogan, “Inquilab zindabad!” (Long live revolution!), which electrified the Indian masses.

It is an insult to their memory, and to their self-sacrificing heroism, to credit India’s independence to the most compromising, cowardly and obscurantist representatives of the India bourgeoisie.

All progressives, workers and peasants have a duty to honour these heroes, to perpetuate their memory and to learn from them in the continuing struggle against imperialism and exploitation.

Indeed.  But that was then and this is now.  Or is it?  Have things changed so much that even though nonviolent civil disobedience wasn’t really the way that India actually managed to achieve democratic independence — if not for its still very much destitute, oppressed and exploited millions, then for its comprador bourgeoisie — today things are so much different in the industrialized West that true and equitable democratic rule is really at hand if only the plebeian majority could come together as one and vote it’s own honest and loyal representatives into the halls of the institutions of bourgeois liberal democracy?

Personally, I very much doubt it.

Because it would be pointless for me to write out for myself what others have already written and doubtlessly far better than I myself might as an argument for doubting the efficacy of ‘voting’ or ‘peaceful protests’ as the road to something better than capitalism, permit me to leave you with two references or recommended readings to consider and about which to think, one an article published by an online “bi-monthly anti-imperialist newspaper written in Britain,” calling itself LALKAR, the other, an excerpt that I’ve once already posted, from a piece written by the late Chris Harman, titled: How Marxism Works (May 1979).

In no particular order of preference:

a)  The British Road to Revisionism (LALKAR)

In the January/February 2008 edition of Lalkar we carried an article which highlighted the revolutionary programmes of British Communism and finished it with a few brief words about the revisionist British Road to Socialism.  The purpose of this article is to broaden that analysis and criticism of the series of programmes of first the Communist Party of Great Britain (CPGB) and then the Communist Party of Britain (CPB) that went under the title of the British Road to Socialism (BRS).

b) How can society be changed? (Chris Harman / Marxists Internet Archive)

In Britain the overwhelming majority of socialists and trade unionists have generally argued that society can be transformed without violent revolution. All that is needed, they say, is for socialists to win enough popular support to gain control of the ‘traditional’ political institutions – parliament and the local councils. Then socialists will be in a position to change society by getting the existing state – the civil service, the judiciary, the police, the armed forces – to enforce laws to curtail the power of the employing class.

In this way, it has been claimed, socialism can be introduced gradually and without violence, by reforming the present set up.

This view is usually referred to as ‘reformism’, although occasionally you will hear it referred to as ‘revisionism’ (because it involves revising Marx’s ideas completely), ‘social democracy’ (although until 1914 that meant revolutionary socialism) or Fabianism (after the Fabian Society which has long propagated the reformist view in Britain). It is a view accepted by the left as well as the right of the Labour Party.

Reformism seems, at first sight, very plausible. It fits with what we are told at school, in the papers and on television – that ‘parliament runs the country’ and that ‘parliament is elected according to the democratic wishes of the people’. Yet despite that, every attempt to introduce socialism through parliament has ended in failure. Thus there were three majority Labour governments in Britain between 1945 and 1979 – with massive majorities in 1945 and 1966 – yet we are no nearer socialism than in 1945.

The experience abroad is the same. In Chile in 1970, the socialist Salvador Allende was elected president. People claimed that this was a ‘new way’ to move to socialism. Three years later the generals who had been asked to join the government overthrew Allende and the Chilean working class movement was destroyed.

There are three interconnected reasons why reformism must always fail.

I mean, if you’ve ever wondered what Marxists think about ‘how’ change might be achieved and ‘why’ in one particular preferential way and not so much in others . . . and straightforwardly . . .

And just so that people don’t think that the good people of LALKAR and Chris/ Harman and myself are actually calling for violent revolution, trying to, so to speak, incite people to rise up with extreme prejudice, I’d like to share a short comment on the tension between ideological inertia and the impulse to revolution, something I wrote to a friend who was expressing a great deal of frustration with respect to mass protests or mobilizations that seem always to go absolutely nowhere — this, roughly speaking, is how I see that tension:

Epochs are times of stability, when a social order — however unjust or just, repressive or not — is more or less persistent over a period of time, when social roles are more or less clearly defined and the majority of people adhere to their assigned duties and accept, if not always in gratitude but grudgingly, the rewards deemed to be their due by the norms of the dominant ethos of their society. Epochs, in other words, are the historical periods in which ideological conformity, and not critical dissent, is the rule.

When the system begins to break down, when large numbers of people begin to suffer acutely from not having their basic needs and expectations satisfied in customary ways, the end of the epoch draws nigh, people begin to be shaken out of their ideological trance, to wonder about what the fuck is going on. They notice that between the promises being preached by the elect from on high and the paltriness of the miracles being realized on the ground, there is a painful discrepancy if not a chasm.

When the people begin to suffer en mass and the suffering becomes sufficiently intolerable, that is the time of possible mass upheavals, and there is no telling how turbulent the coming storm might be or what it may leave in its aftermath.

The aftermath will certainly be a new order, a new epoch dominated by a new ideology, the mindset or culture of whoever will then comprise the new ruling class. This mindset will most certainly and in many ways resemble the dominant mindset(s) of what went before: it will be reactionary or progressive on the basis of what was because nothing in the evolution of culture or modes of life ever emerges into the light of day that isn’t largely a variation of what went before.

Therefore, the likelihood of a socialist aftermath will depend upon how far and wide the ideals of socialism will have been disseminated before the upheaval happens. You cannot make a revolution; but a revolution can to some degree be co-opted. That is the most that progressives can hope for.

To my mind, if the aftermath of the next upheaval turns out to be a step forward rather than backward, industry will be geared more to the satisfaction of human needs; and the pursuit of technological advances to enhance productivity — rather than being motivated as it is now by a mindless drive to pad and monopolize profit margins — will be used to drastically reduce the workday for everyone.

Everyone talks about freedom, but no one really says what in fact it is in concrete terms: it is leisure.

A society that truly prizes the individual and his freedom will try in so far as it can to increase for all its citizens in as equitable a fashion as possible a maximum of leisure time, to create the ‘space’ in which each person, unharried by the hurly-burly of making ends meet, can explore and discover, alone or in company, the joy of engaging in self-selected and self-directed pursuits.

Technology reduces work-time and the drudgery of work, and that should be its only socially useful and redeeming purpose.

If someone asked me what I had in mind when I speak of my hope for a socialist future, this would be the outline of my answer.